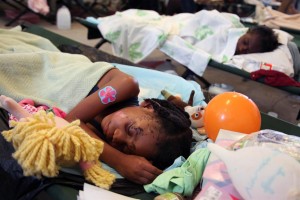 Caption to come.
Photographer’s caption: Port-au-Prince, 19/01/2010
An unaccompanied child who is currently in the field hospital set up in the Minustah log base,
will move to a home run by CAD a haitian NGO with the help and monitoring of Unicef.
It was deemed necessary to move all unaccompanied children together, as they have created some bonds, but not all children are well enough to move yet.
Port-au-Prince, 19/01/2010

On 19 January 2010 in Haiti, humanitarian assistance for survivors of the 7.3 magnitude earthquake that hit the country on 12 January is improving steadily as capacity and logistical constraints are being addressed. Nevertheless, needs remain great. Unaccompanied children who have lost or been separated from their families are among the most vulnerable. Authorities estimate that as many as 200,000 people have died (with more than 50,000 bodies collected to date). An estimated 3 million have been severely affected by the disaster. The quakes epicentre was only 17 kilometres from Port-au-Prince, the capital; the nearby cities of Carrefour and Jacmel were also hit. Major government and private infrastructure have been destroyed or heavily damaged, including hospitals, water, sanitation and electrical systems, and telecommunications, banks and transportation networks. United Nations and UNICEF buildings and residences were also hit, and UN staff and peacekeepers with the United Nations Stabilization Mission in Haiti (MINUSTAH) are missing and many are now confirmed to have died. MINUSTAH, totalling 7,000 peacekeepers and 2,000 police, have relocated their logistics base close to the airport to help coordinate incoming international relief assistance. The UN Consolidated Flash Appeal for the Haiti earthquake emergency requests US $575 million for relief and recovery for the next six months. UNICEFs portion of the appeal is US $127.9 million  UNICEF is also the lead coordinating agency for education, child protection, nutrition and WASH (water, sanitation and hygiene). Working with the Government, other UN agencies, international and local NGOs and private partners, UNICEF is distributing safe water supplies and equipment, oral rehydration salts, and medical and shelter materials, with more on the way. UNICEF is also working with partners to set up centres for unaccompanied children to ensure their care and protection throughout the crisis. This latest catastrophe exacerbates Haitis already critical humanitarian situation. An estimated 46 per cent of its nearly 10 million inhabitants are under age 18, and more than 78 per cent of the population lives on less than US $2.00 a day.

Any cookies that may not be particularly necessary for the website to function and is used specifically to collect user personal data via analytics, ads, other embedded contents are termed as non-necessary cookies. It is mandatory to procure user consent prior to running these cookies on your website.